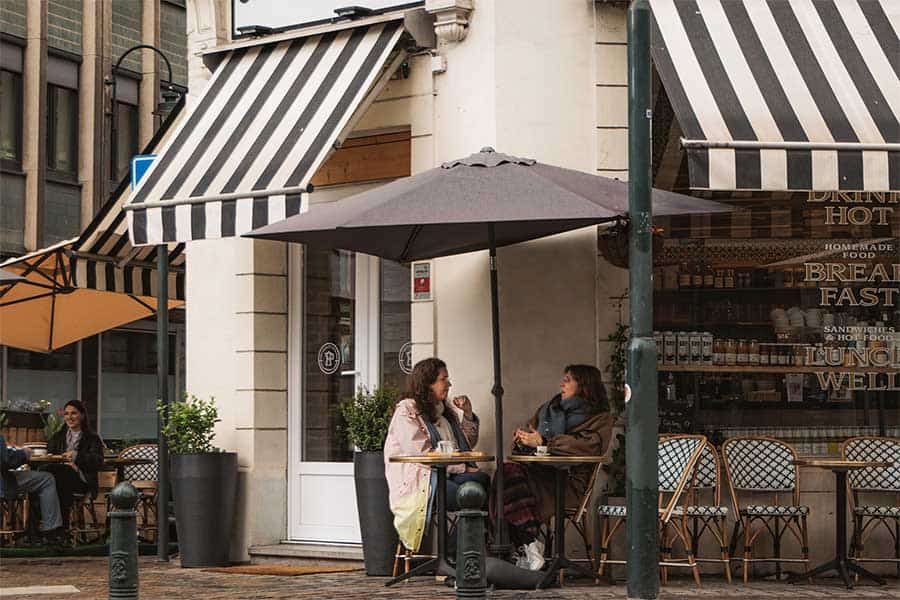 If you enjoy authentic food experiences, eat Belgian waffles like they do in Belgium. In their homeland, these waffles are often eaten as an afternoon snack, with a little butter and a dusting of confectioner’s sugar on them. Some may also have a helping of fruit topped with cream or chocolate sauce.

Today, we are going to look at how to eat Belgian waffles just like they do in Belgium so that you can enjoy a true experience with these treats, rather than eating them in the “tourist” fashion. You might be surprised by just how different this is!

When Should I Eat Belgian Waffles?

In America, these waffles are often eaten as a treat for breakfast. Some people may choose to have them for lunch, supper, or a snack, but in general, they are seen as a morning meal.

It is very different in Belgium, where the waffles are generally consumed as an afternoon snack, or occasionally as a dessert following from the main course.

They are not seen as a meal in themselves, but as a little morsel to fill a gap between lunch and supper. Although a Belgian waffle isn’t exactly small. In some parts of Belgium, you will not find a cafe that serves waffles in the morning, unless the cafe caters specifically to tourists.

This different approach plays into how they are served, which we will cover next.

What Toppings Should I Add to Belgian Waffles?

In Belgium, waffles are commonly served with just butter and a sparse dusting of confectioner’s sugar – and nothing else at all. They do sometimes come with some fruit, such as sliced strawberries, bananas, or a handful of blueberries. But in general, these are seen as a light meal or treat.

In America, Belgian waffles make up an entire meal, and an important one – breakfast.

They are usually served hot and are often covered in syrup and cream. They sometimes get topped with bacon, or with piles of fruit and sugar. They are often seen as the ultimate luxury breakfast, and they certainly are not considered simple food.

You can have almost anything on the American version of the Belgian waffle, but it is commonly seen covered in maple syrup, with the deep pockets of the waffle holding pools of gold. Add bacon or piles of whipped cream, and you have a dish that is almost unrecognizable from the original.

Are Belgian Waffles the Same Food in Belgium?

If you want to be strictly accurate, there are two kinds of waffles that tend to be made in Belgium that are known internationally. There is the Brussels waffle and the Liege waffle. Both are named after the places that they originated from, and the Brussels waffle is most like the waffle eaten in America today.

The Brussels waffle is usually rectangular, and it’s very crispy and light. Traditionally, it is made with yeast, although some recipes now call for baking powder to speed up the process. Some are also made in circular molds.

A Liege waffle is usually chewier and richer, and it’s made from a dough, rather than a batter. Golden in color, the waffles may be round or hexagonal, and they are covered in caramelized sugar.

These waffles are often eaten without further toppings, as they are very sweet and do not need additional flavoring. However, some people do choose to add ice cream, sugar, or cream to make them extra decadent.

The Liege waffle is rarely seen in America because it was the Brussels waffle that was brought over first.

At the 1964 New York World’s Fair, a Belgian man from Brussels introduced Brussels waffles to the public, with a somewhat simplified recipe. However, he noted that many Americans did not realize Brussels was the capital of Belgium, and he, therefore, changed the name to the Bel-Gem waffle.

This soon became the Belgium waffle. If you want to eat waffles as they do in Belgium, however, it’s important to make a distinction between the Brussels waffle and the Liege waffle, because they are different foods, made in different ways.

What Should I Put on Belgian Waffles?

Depending on your preferences, you might enjoy getting back to the basics with Belgian waffles. In Belgium, the point of the waffle is the waffle, and not its toppings. It is not about smothering it in sugar and cream and as many other tasty treats as you can think of. It is about making a delicious, tempting, and crispy waffle.

Instead of thinking about the waffle as a means of holding toppings that you enjoy eating, think about enjoying the waffle. If you hide all the flavor and texture beneath other foods, you might as well just eat the toppings. It is key to focus on getting your waffle recipe perfect, rather than just piling food on top that will mask the flavor.

If you want to go down the traditional route for topping your waffles, the key is to minimize. You don’t need bacon, maple syrup, or mounds of sugar. Waffles were a street food meant to be eaten with your hands – so don’t cram on the toppings.

You can even eat Belgian waffles totally plain, and this is often done in Belgium because the batter is a treat in itself. However, if that doesn’t appeal, try them with a little bit of butter and a touch of confectioner’s sugar.

If you are keen on fruit, another option is a small helping of whipped cream and some freshly sliced strawberries. These are the two options that were served when the waffles were first introduced to the American public.

Belgians never put maple syrup on their waffles, because the waffle batter is already sweetened, and does not require more sugar.

If you insist on toppings, use the Brussels waffle, the type considered to be a Belgian waffle in America. With the Liege waffle, you definitely don’t add any toppings. It is made with a kind of dough rather than a runny batter, and it has a much richer taste than the more neutral-flavored Brussels waffle. A little topping can enhance a Brussels waffle but will detract from the flavor of a Liege waffle.

Liege waffles are definitely less well known in America, but they are very common and popular in Belgium. A Liege waffle doesn’t look as immediately attractive, and it isn’t as light and fluffy. You have to chew more, and they are a heavier experience. They also contain pearl sugar, which is small coarse lumps of sugar that caramelize on the exterior of the waffle and a sugary delight to bite on.

However, they are extremely popular in Belgium, and you should not dismiss them if you want to try the authentic Belgian experience. If you aren’t expecting them to taste the same, you will probably find that their deep flavors and dense textures are highly satisfying.

The only way to know for sure is to try them, but don’t douse them in maple syrup or sugar. Trust that the flavor will be good and give it a chance to wow you just as it is. These waffles are commonly eaten plain in Belgium, and the caramelized sugar that they are made with should be enough to sweeten them.

Should Waffles Be Eaten Hot or Cold?

You might not dream of eating a cold waffle, but many Belgians do. Although waffles are certainly enjoyed hot, nobody in Belgium would think anything of devouring a cold waffle. They are cooked in such a way that they do not lose their quality or texture by being allowed to cool.

So, now you know the answer to how to eat Belgian waffles the traditional way: cut back on the toppings and let the waffles shine.

These treats were meant to be eaten with few toppings if any, and you don’t need to pile on bacon or syrup to enjoy them. Trust the batter and learn how to make them delicious with minimal additions.