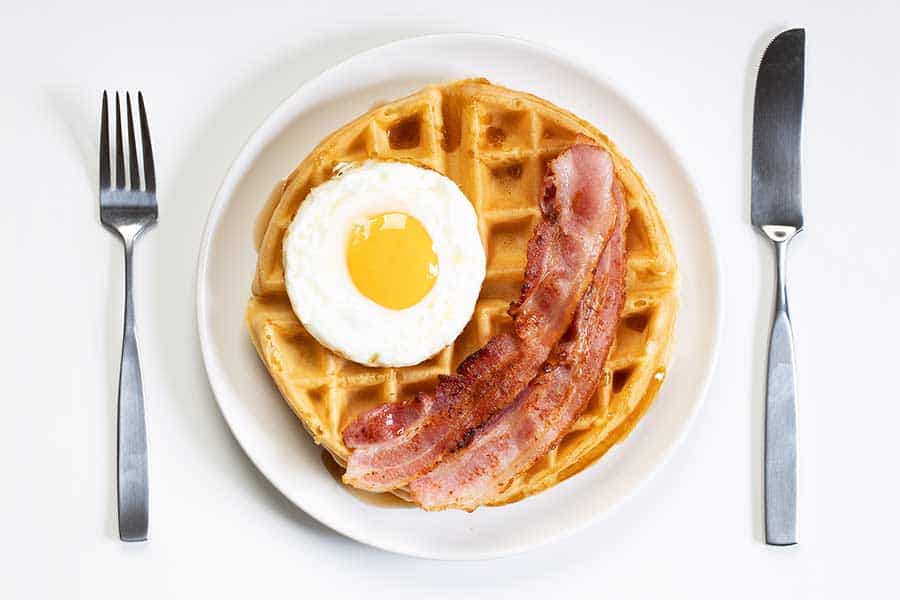 Frozen waffles are an iconic childhood breakfast for many people. While most people cook their frozen waffles in the toaster oven, that is only one of several ways you can cook frozen waffles to make them taste great.

Below you’ll find the four best ways to cook frozen waffles along with some special tips for improving their texture and flavor. Keep reading to get the most out of a box of frozen waffles for your next breakfast.

How to Cook Frozen Waffles

When it comes to cooking frozen waffles, there are two important things to remember:

With those concepts in mind, let’s look at four methods for cooking frozen waffles and how they affect the taste of the waffles.

Cooking frozen waffles in a toaster oven is probably the most conventional way to cook them. While this method will result in waffles that are pale and lightly crisped, this is one of the plainest ways to cook them, in terms of taste and texture. Nonetheless, this method of cooking waffles is a good choice if you have children who are picky eaters since the cooking doesn’t give the waffles a strong flavor.

Here’s how to cook frozen waffles in the toaster oven:

An advantage of using a toaster oven is that it is the quickest way to cook frozen waffles if you need to get them on the table in a hurry.

Cooking frozen waffles in an air fryer is similar to cooking them in a toaster oven. This is because you can cook the waffle fully while keeping the interior of the waffle slightly soft but properly heated. This is a good cooking option for people who like a crispy texture to their waffles since the heated air prevents the waffle from getting soggy.

Here’s how you can cook your frozen waffles in the air fryer:

Depending on your air fryer, it may take a bit of experimentation to hit on the ideal cooking time. For a softer waffle, try lowering your cooking temperature, your cooking time, or both. Keep an eye on your waffle while cooking since it is easier to overcook a waffle when using this cooking method.

Cooking Frozen Waffles on the Stovetop

Cooking frozen waffles in a skillet on a stovetop is a more labor-intensive way to make frozen waffles. Even so, many people believe this is the best way to use, out of all familiar methods. This is especially true if you want your waffles to have a browned and crispy crust to them.

Here’s the best way to cook frozen waffles on the stovetop for maximum crispness and flavor:

The disadvantage of cooking frozen waffles in a skillet on the stovetop is that you will have more to wash up and clean at the end of breakfast. Also, if you’re counting the calories, this method adds extra fat during cooking. Even so, it’s still much quicker and easier than making waffles from a batter mix or making them from scratch. Also, many people think it gives the waffles more flavor, making them taste much more like homemade than the other methods of cooking frozen waffles.

Cooking frozen waffles in a convection oven is about as easy as doing them in a toaster oven. But you’ll need to make sure the oven is nice and hot to prevent the waffles from getting soggy. Be sure not to put the waffles in the oven and forget about them either, since you could end up burning them. If you’re busy getting other things ready for breakfast it might be a good idea to set a timer.

Here’s the best way to cook frozen waffles in a convection oven:

Cooking frozen waffles in a convection oven is a great cooking method if you’re using the waffles as part of an open-faced sandwich. Cook the waffles in the oven until they are nearly ready. Then top them with some cooked breakfast sausage, scrambled eggs, and cheddar cheese. Return the waffles to the oven for about a minute, or until the cheese has melted. The result will be a breakfast that is not only flavorsome but will also fill you up all morning.

Using the methods above are a good shortcut towards making some killer waffles, but there are a few other techniques you can use to make sure your frozen waffles turn out perfect every time. Follow these tips to get a good result every time you bake frozen waffles:

The major key to all the above cooking methods for making the best-frozen waffles is watching over the waffles while they cook.

It doesn’t take long at all for waffles to overcook. So make sure to keep an eye on them and pull them out as soon as they look done. This will help keep you from serving crunchy, hard, unappetizing waffles. Top off with high-quality maple syrup and you’re good to go.

I know we all have our own favorite waffles, but here are three frozen waffles I think are worth trying.

Buttermilk Protein Waffles from 365 by Whole Foods Market use high-quality ingredients, like unbleached enriched wheat flour, but come in at a good price.

Kashi GO frozen whole-grain protein waffles burst with the sweetness of wild blueberries will keep you satisfied and active, with 13g protein per 76g serving.

Kodiak Cakes frozen buttermilk & vanilla waffles. These Power Waffles are not heavy on carbs and have a good amount of protein. They’re not too sweet, letting the taste of the grain come through. They certainly make you feel full for longer.

Whichever brand of frozen waffle you try, each one is a great way to kickstart your day. 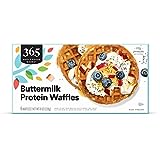 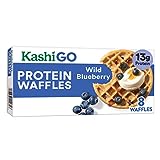 If you are like me, waffles just aren’t complete unless they are served with maple syrup. The real thing isn’t cheap, but I think it’s worth it. You can get many types of maple syrup, some dark with a robust flavor, while others can be light amber and have a complex taste.

I love the organic steam-crafted maple syrup from Maple Guild in Vermont. Not only has the Grade A Amber syrup a subtle and nuanced flavor but they also produce a wide range of syrups and other produce.

Maple Guild has an innovative way of producing maple syrup. Instead of boiling the sap for hours to remove the excess water Maple Guild uses reverse osmosis and then steam crafting. The steam-crafting method does not need to heat the concentrate to as high a temperature and is quicker. The company says that as a result, the process produces a more nuanced maple flavor.

Before trying some, see what it takes to turn about 44 gallons of Vermont maple sap into a gallon of grade A amber maple syrup.

If you want a different syrup option here are three really fine alternatives. 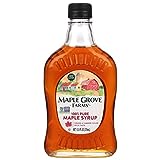