The terms waffle maker and waffle iron are often used interchangeably. However, they shouldn’t be. While both products help you to make waffles, they do it in a completely different way. Let us explain.

A waffle maker is an electric gadget. You plug it into the wall outlet, switch it on, and pour your waffle batter into the grid plates. A waffle iron needs an external heat source. It is often placed over a fire or a stove. Both waffle makers and waffle irons produce excellent tasting waffles. 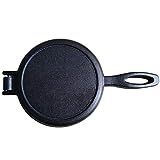 Waffle Maker vs Waffle Iron: What Are They?

While there are a lot of differences between waffle makers and waffle irons, the main difference can be summed up like this:

While waffle irons are often used on stoves, this isn’t the only place that you will be able to use one. For example, some people bring waffle irons along on camping trips. They are sturdy enough to be used on an open flame. If you are interested in a waffle maker that can be used for camping, then we urge you to check out our list of the five best waffle irons for camping.

For the rest of this page, we are going to be comparing the differences between waffle makers and irons. This will allow you to decide which option is going to be the best one for your needs.

When most people are comparing a waffle maker vs waffle iron, their main concern will be how easy they are to use.

Now, to be honest with you, both waffle makers and waffle irons are pretty simple to use. They both involve pouring the batter in between two metal plates and heating it up until you have something that looks and tastes like a waffle.

A waffle maker is so much easier to use, though. Most waffle makers just require you to heat up the waffle plates, pour the batter in, and then wait. They are fantastic if you want to make waffles with the minimum amount of hassle. You will end up with a fantastic tasting waffle in just a couple of minutes.

Using a waffle iron is a little bit more involved. Depending on the waffle iron that you have (and how you are cooking the waffles), you may have to flip the waffle iron over during the cooking process. You will also need to ensure that the waffle plates are evenly heated, otherwise, you could end up with a partially cooked waffle.

Basically, waffle irons may not always produce the best waffle. The only way to produce a quality waffle with a waffle iron is to actually pay attention to what you are doing. If you have a waffle maker, then you are going to get a consistently good waffle, assuming you do not change the batter recipe that you are using.

We are 100% positive that you want the absolute best waffle that you can shove into your mouth.

To be honest, waffle makers and waffle irons are fairly similar in terms of the quality of waffles that they produce. Because, at the end of the day, their main job is to heat up the batter. There isn’t that much that can go wrong here, the main difference between them is the heat source.

As we said before, you have to pay a little bit more attention when you are using a waffle iron. While cast iron is fantastic for keeping the temperature even, you may still sometimes run into issues where parts of the waffle iron are colder than others. You also become part of the way a waffle irons works because of where you place the waffle iron on the stove, and compared to a waffle maker’s automatic timer, your baking times may not be as consistent.

If you want to use a waffle maker, then you need to have a power outlet that you can use. They won’t heat up otherwise.

With a quality waffle iron, you can use pretty much any heat source. Traditionally a waffle iron will be used over a stovetop. However, quality cast iron waffle irons could also be used on camping trips.

If you are only making waffles inside of your home, there is no real difference between the two. We are sure that you all have electrical outlets and a stove in your home. However, if you want to take the iron camping (trust us, waffles while camping is awesome!), then pick yourself up a waffle iron.

Waffle irons are a whole lot easier to clean. You can pretty much just throw it into your normal dishwashing and you should be fine.

Waffle makers, not quite so much. Only the more expensive waffle makers on the market will have removable plates that you can clean. This means that, in many cases, you will need to take a wet cloth and wipe down your waffle maker. It can be pretty tricky to remove burned-on bits too.

Even if you do have a waffle maker that has removable plates, you will still need to wipe down the outside of the waffle maker. We all know how waffle batter can get everywhere!

Waffle irons will require a lot more maintenance, particularly if you have a cast iron waffle iron. You will need to season the waffle iron every so often. You may also need to put in a bit of work to ensure that the surface doesn’t become tarnished.

That being said, most issues with a waffle iron can be rectified. Gone a bit rusty? Rust can be scrubbed or wiped away. Is the hinge becoming loose? That can be replaced or tightened. When a waffle maker breaks, it is pretty much always down to an electrical fault. This can be exceedingly tough for the average person to deal with.

This leads us neatly onto the next point.

A properly cared for waffle iron can last a long time. There are cast iron waffle irons that are a good 40-50 years old that are still going strong. In fact, the long lifespan of a waffle iron has resulted in many people seeing them as collector’s pieces. They can be well over 100 years old and can function as originally intended. Old cast iron waffles iron can also be restored and used again. Provided the cast iron has not cracked or been broken, you just need to remove the rust, season the metal surface, and you’re good to start using the waffle iron again.

In comparison, even the best quality waffle makers may give you 5-10 years of use, depending on the amount of use and how careful you are. This is because the electrical heating element, electrical components, and the insides of the waffle iron will gradually break down because of the huge amount of heat that is being applied to them. It’s a sad truth that modern household gadgets are not designed to last.

Let’s be honest. Most of us are not making waffles every single day. If you purchase a waffle maker, then you may have a good section of your kitchen cupboards taken up by something that you are using once in a blue moon. They take up a lot of space.

A waffle iron doesn’t. In fact, most waffle irons take up no more space than your average frying pan. This means that if you want to save a ton of space inside of your cupboards, then we would absolutely recommend that you go down the route of a waffle iron.

When it comes to kitchenware there no denying that cast iron is a heavyweight when you compare waffle makers and waffle irons. Although I love using my cast iron cookware, my wife prefers to use something that’s much lighter. That’s one reason why we have a Waffle Maker in the kitchen. Waffle makers are generally lighter and easier to handle.

If you want a waffle iron without the extra weight of cast iron, I have found three highly rated cast aluminum waffle irons on Amazon. In fact, if you use the link to the NordicWare 15040 waffle iron you will see it has options for a Belgian waffle iron, Square Mini Waffle Griddle, Egg Waffle Pan, Silver Dollar Waffle Griddle, and a Waffle Dipper Pan. 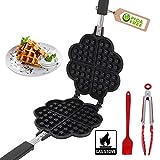 Waffle makers can be incredibly cheap. It is not uncommon to find a waffle maker at around the $20 price point.

While you can find waffle irons this low, they aren’t really going to be the good ones. A good waffle iron will be a cast iron waffle iron. These can be many times more expensive than even the best waffle makers, particularly if you buy one of those waffle irons that are fit for collectors.

However, you should bear in mind that the waffle iron is going to be an investment. As we said before; this is something that is going to last you decades. It may be the only waffle iron that you ever need to purchase. If you are picking up a waffle maker, then you may need to replace it every few years. The cost will start to add up.

Due to their versatility and lifespan, we would always recommend that you go down the route of a waffle iron. When used properly, they produce a far better waffle. However, if you want something cheap that is lightweight and easy to use, then a waffle maker may be right for you. But no matter which way you look at the waffle maker vs waffle iron debate, at the end of the day, you are always going to end up with a tasty waffle! It’s always going to be satisfying whichever way you make it.