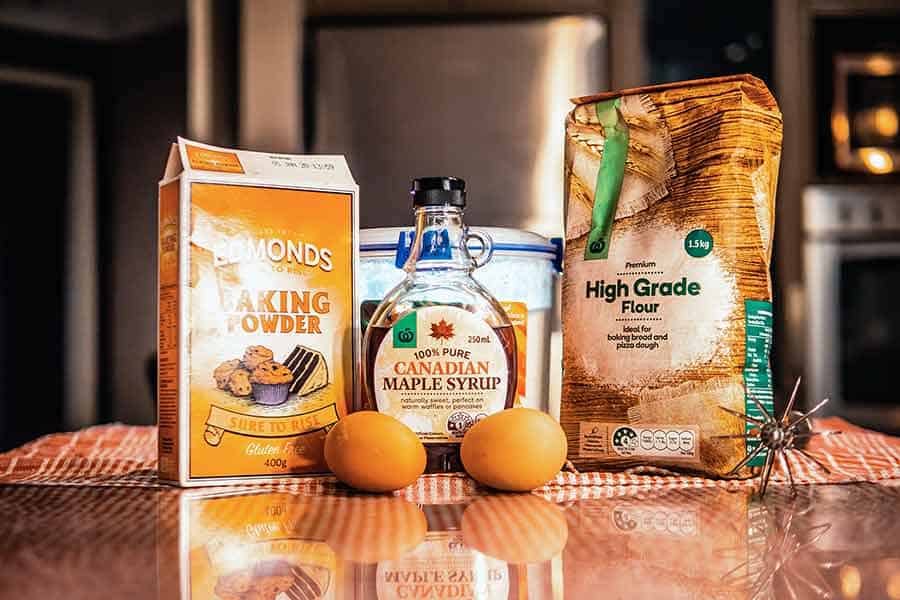 Can you make waffles without vegetable oil?

Although both fats and oils will help make your waffles moist and fluffy, the research mentioned above shows that using solid fats instead of oils will help reduce the likelihood of your waffles sticking. The obvious benefit is that you get perfect waffles for your breakfast or treat. Plus, the subsequent cleaning of your waffle maker will also be easier if there are no stuck batter residues that you need to remove.

Although many people use vegetable oil in waffle batter you can make waffles without oil. According to scientific research, using hard fats, such as butter, lard, or coconut oil instead of oil produces excellent waffles that are lighter in color and less likely to stick in the waffle iron.

Even so, I don’t see all oils being completely replaced by solid fats in waffle batter.

Adding oil to your batter mix makes the preparation of the batter quick easy on several levels. You can keep a bottle of oil at room temperature in the cupboard, no need to keep it in the refrigerator. Unlike solid fats, you don’t need to heat and melt the oil before adding it to the mixing bowl. The shelf life of oils is also quite long. And since oil is a liquid at room temperature, it’s easy to handle and incorporate into the waffle batter mix.

What oil to use for waffles

Health: Vegetable oils are said to be healthier than animal fats. Canola or rapeseed oil is a good example of an oil with health benefits. Canola oil has lower levels of saturated fats than any other vegetable oil used in the U.S., which is seen as being beneficial. Eating less saturated fat can cut cholesterol levels, so Canola oil is one of the best oils for heart health.

An alternative oil with plenty of health benefits is coconut oil, like this 2.38Kg tub of Kirkland Organic Virgin Coconut Oil available on Amazon. When kept in the refrigerator coconut oil is a white solid, so let it soften at room temperature or treat it like butter and melt in a pan before adding to the waffle batter mix.

So far, I’ve only considered vegetable oil as an ingredient in waffle batter and not as a release agent or something that’ll stop waffles sticking to the waffle maker.

Most of us will coat the grids in a waffle maker with a tiny film of vegetable oil to prevent sticking. However, the non-stick cookware purists would insist that you do not need any oil or fat in non-stick or Teflon cookware.

So, can you make waffles without vegetable oil? Sure, they’ll taste fabulous and you’re more likely to be able to get them out of the waffle maker without any sticking.

Why does waffle batter contain oil?

Adding oil to waffle batter produces waffles with a softer and fluffier texture while helping to develop a golden crispy and crunchy outer coating. The oil also creates a release film on the waffle’s surface during baking. This helps to prevent the waffle from sticking to the waffle iron grids.

According to a research paper published in Food Science & Nutrition about the influence of the ingredients in waffle batter, the type of fat or oil used had important consequences.

The research team also found that using solid fats rather than liquid oils in the batter reduced the number of waffles that were likely to stick.

So, there’s no argument. It has been shown scientifically that if you want fewer waffles to stick to your waffle iron grid plates you should ditch the oil and use solid fats in your waffle batter.

Are Waffles better with oil or butter?

From the research paper published in Food Science & Nutrition, as well as knowing the answer to, “why do you put oil in waffle batter”, we can also answer this question about whether waffles are better with oil or butter.

If you want to know how to make waffles without vegetable oil and still make them wonderful, or even more wonderful switch out the vegetable oil for butter. But remember to use melted butter, that way you won’t have to overwork the batter in the mixing bowl.

By swapping butter for the oil in your batter mix, your waffles are less likely to stick to the waffle iron.

However, taste and appearance also come into play. Let’s first look at appearance.

The research paper in Food Science & Nutrition also showed that choosing between fats or oils as an ingredient also had implications for the color of the waffle. As the paper stated, “fat source influenced color; after the addition of rapeseed oil, waffles were significantly darker, those with butter and Cocos fat were brighter and less red.”

So, if you like a lighter shade of waffle be sure to use a solid fat in your batter. Alternatively, if you prefer your waffles to be a darker color, you should opt for rapeseed or Canola oil.

Now, how about taste?

Most people tend to agree that butter tastes better than most oils, especially the neutral flavor of oils like Canola oil. Personally, I prefer the richer taste of butter and think waffles taste a whole lot better with butter.

So, whether it’s about taste or ensuring your waffles don’t stick, you could say, butter batter’s better!

How much oil do you use for waffles?

About ½ Cup of oil, or its equivalent, is used in waffle recipes. However, the oil can be replaced by a solid fat, like butter, lard, or coconut oil. In Oster’s Classic Waffles recipe ½ Cup of melted butter is used to make 5½ Cups of batter. That represents 9% of the batter by volume.

So, the amount of oil in a waffle recipe is not a fixed quality, although you could say the oil equivalent makes up about 9% of the volume of the batter.

Most waffle recipes tend to include baking powder, eggs, flour, milk, oil, salt, sugar, and vanilla extract. However, the proportions are variable, as is the amount of oil. There may even be no oil at all in the batter mix.

Oster, the kitchen appliance maker, provides recipes in its waffle maker instructions. In each of those recipes, there is no mention of vegetable oil because melted unsalted butter takes the place of the oil. The butter does the same job as the oil but lends a more traditional flavor to the waffle.

You may have noticed that waffle and pancake batter seem identical. However, waffle recipes include either fat or oil whereas pancake batter recipes do not. This is because waffles are baked in a waffle maker and the oil plays a key role in crisping the waffle’s surface and helping to release it from the waffle iron.

At the end of the day, the amount of oil or fat in the batter depends on personal preference and your chosen recipe. But typically, around ½ Cup of oil or fat is used to make 4½ – 5½ Cups of batter.

link to How to Keep Waffles Crispy: Ideas for Feeding a Crowd

If you’re making waffles for a lot of people, you’re going to be wondering how to overcome one of the biggest problems that waffles suffer from: they go soggy. Nobody likes soggy waffles;...

Continue Reading
link to How To Make Waffles from Scratch

Have you ever wondered how to make waffles from scratch? These delicious, crispy treats don’t have to be reserved for posh restaurants or packet mixes you might pick up at the store – they can...