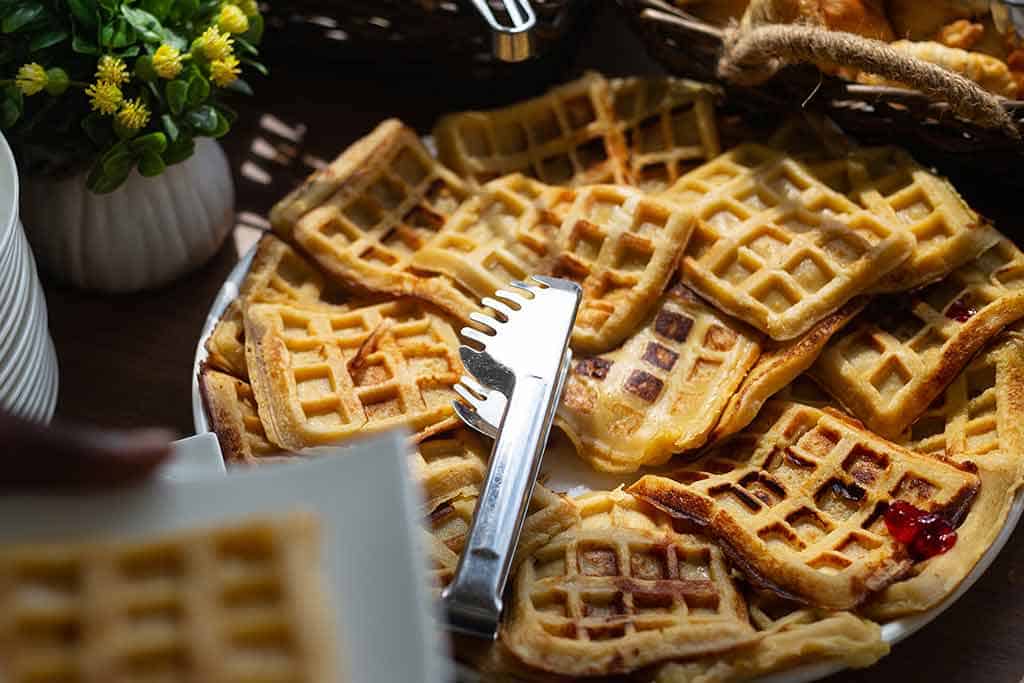 Waffles are a delicious breakfast, but many people find that they run into problems with creating the perfect waffle – it’s extremely easy to get something wrong with these somewhat finicky foods, even though they should be simple.
If you’ve ever asked why are my waffles soggy? there are a few possible reasons. These include a faulty waffle iron, under-cooking, or failing to lighten the batter with something like egg whites. We’re going to look at a few common mistakes and some tricks for getting your waffles to crisp up nicely.

If your waffle iron isn’t hot enough to sear the batter and help the moisture evaporate, you’ll end up with soggy waffles no matter how long you cook them for. Your waffle shouldn’t sit on a warm iron; it needs to hit a sizzling hot metal surface in order to get a good, crispy shell.

You may find that your waffle iron just doesn’t get hot enough, especially if it’s old. It might be time to replace it if you can’t get enough sizzle. In the meantime, crisping the waffles in a pan after cooking will help a bit, but this isn’t a great solution in the long-term.

Strangely, you can find that a waffle iron that doesn’t get hot enough can also result in waffles drying out. So, it’s worthwhile making sure your waffle iron is working properly.

It’s important to make sure the waffles are completely cooked. By that I mean that the

Waffles Can be Soggy if They Can’t Steam Properly

If you’re making several batches of waffles, it’s really important to think about what you do with the waffle when it comes out of the waffle maker. If you plonk waffles on a plate in a haphazard pile, they’re going to end up soggy, because the steam can’t rise and disperse; it will stay in the waffles instead and soften the crispy shell.

To avoid this happening, put your oven on a low heat setting, say about 200°F, and transfer waffles to a wire cooling rack inside the oven. This will give the waffles plenty of room to steam and keep them hot while they do it. If you need to stack the waffles, stack them in an even pile so that the steam can rise and won’t get trapped.

Even if you aren’t keeping your waffles hot in the oven, a cooling rack is essential unless they are going to be eaten immediately. Stack waffles up on the grid so the steam can vent, and they’ll keep that crispy texture for longer (though not indefinitely).

If you find your waffles have gone a little soft, you can crisp them up again by popping them into a toaster on a low to medium setting. This works well even if you made your waffles the day before and kept them in an air-tight container.

How to Avoid Making Soggy Waffles

Add some extra Sugar to your waffle mix

If you’re looking for ways to make your batter crisper, rather than things to avoid, adding sugar can be a good one. A little extra sugar will help. The sugar will caramelize at the surface of the waffle and cause the waffle’s casing to crisp up nicely.

The additional sugar shouldn’t affect the taste much. In fact, if you’re Scottish or have Scottish roots you may relish the extra sugar in the waffle batter. Scots have a famously sweet tooth. We love all things sweet, like chocolate, candies, iced doughnuts and Yum Yums (a yeasted pastry), and deep-fried Mars bars.

Actually, the deep-fried Mars bars are really a touristy thing, however, they are a thing, and I can vouch for their existence. I’ve seen deep-fried Mars bars offered on the sweet menu of a good Edinburgh hotel, and in Fish and Chip shops on both the east and west coasts of the country.

If you have some cornstarch in your kitchen, adding a small amount can be a great way to help avoid soggy waffles.

It may seem surprising that something like this can make a difference, but it’s a great thickener and will help your waffles to cook and crisp up beautifully.

You may have heard about whisking the egg whites separately. That might seem like a bit of a hassle when you just want to make a quick batch of waffles, but it’s actually key to achieving a good texture.

Separating the egg whites from the rest of the batter is important, as over-mixing waffle batter will ruin the texture – but you do want thoroughly mixed egg whites. Spend a good amount of time whipping them up.

The reason this works is that it adds plenty of air to the mixture, making the batter lighter and fluffier. This will make the waffles cook much better and will stop them from being soggy.

Swap Out Some Buttermilk

If your recipe is too heavy, you won’t get fluffy waffles whatever you do – so you might want to experiment with swapping out some of the buttermilk. While buttermilk lends waffles their unique flavor and texture, it can be a little too much.

Switching a portion of the buttermilk for normal milk can help to make your batter a bit lighter. This will then fluff up faster when it hits the hot waffle maker and create a better texture with more air pockets – definitely not a soggy waffle.

Those ideas should help you solve the question of why are my waffles soggy? If you’re having trouble getting enough heat, consider investing in a new waffle maker or even a flip waffle maker; these can easily be purchased online, and will ensure both sides of the waffle get a lovely “sear” to their shells.

Tweak your recipe and your approach, and you should have delicious, crispy waffles every time.