It isn’t easy to turn pancake mix into waffles, but if you only have that to hand and you’re craving waffles, it is possible. Do not use the pancake mix just as it is, because you won’t get anything like waffles!

To make waffles fluffy when using pancake mix you need to add extra ingredients, including sugar, oil, whole eggs, beaten egg whites, and some fresh baking powder. Without these additions the outsides will not become crispy, the centers will not be as fluffy, and the risk of sticking increases.

Let’s look in detail at how to make fluffy waffles with pancake mix. 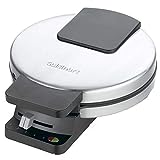 Is Pancake Batter the Same as Waffle Batter?

No, it isn’t. Pancake batter is similar, and both contain a raising agent, eggs, milk, flour, and sometimes fat, but there are some small variations. Surprisingly, these make a big difference to how the foods cook and the end result.

Pancake mix may not contain any fat, and it will have significantly less sugar than waffle mix. Waffle mix will usually have oil or melted butter in it.

However, because the two are quite similar, many manufacturers claim that you can use their mix for either, and to a degree, this will work. However, the waffles that you get maybe a bit flat and crunchy, lacking that soft center that most people love about waffles. They are sort of “almost” waffles, rather than being the real thing.

So, what can you do about this? The answer is: add the missing ingredients to turn your pancake mix into waffle mix.

How Do You Make Fluffy Waffles?

List of Ingredients for Fluffy Waffles from Pancake Mix?

To make your waffles fluffy, you will need the following ingredients.

These ingredients should create enough batter to make approximately six waffles, although this will depend upon the size of your waffle iron.

Start by preheating your waffle iron so that it will be hot when the mix hits it. This is key to making the exteriors of your waffles crispy, which will in turn allow the interiors to stay fluffy.

Once the iron is heating, you should separate your eggs. Put the egg whites in a separate bowl and save the egg yolk.

Next, you can start making your batter. It might be tempting to just make up the pancake mix as normal and pour the pancake batter into your waffle iron, but don’t – it will run out of the edges of the iron, creating a mess. It will also probably burn, and it won’t puff up properly.

Instead, add your pancake mix to a bowl with the water, oil, egg yolk, and sugar. The sugar, oil, and water are key to helping the mixture to crisp up on the outside of the waffles.

Whisk the batter until it is combined, but do not whisk too heavily. A few little lumps are okay, and heavy over-mixing could cause your waffles to become too chewy and hard because you’ll be drawing out the gluten in the flour.

Return to the bowl with the egg whites. You will now need to whisk these until they form stiff peaks. An electric whisk really helps here, because you need truly stiff whites. This is how Belgian waffles are made, and it is what will give you those delightfully fluffy centers.

Many recipes will suggest that you don’t need to do this, but your waffles will not be as fluffy in the center if you don’t. Even with the raising agent contained in the pancake mix, waffles benefit from having the egg whites whisked to peaks.

Once you have achieved fluffy whites, fold them into the rest of the batter. Work gently so you don’t knock the air out of the egg whites. Just lift the batter up and fold it down over the whites.

When all the ingredients are nicely combined, check that your waffle iron is hot. Use a cup to measure out half a cup of your new “waffle mix,” and pour it into the iron, at the center. It will start to flow out and fill the grooves. Slowly shut the lid.

Cook the waffle until the steam stops coming out, and then lift the lid. The waffle should be turning golden on top, and there should be no liquid batter left. It usually takes up to four minutes, but different waffle irons will have different cooking times.

Gently lift the waffle out of the iron and place it on a plate. Now, you’re ready for the next one! Keep cooking until you are out of the batter, then enjoy your breakfast or meal.

Do I Have to Add Extra Ingredients to Make Waffles from Pancake Mix?

Yes, you do. Pancakes and waffles have a lot of similarities, but they are not the same thing. Without additions, pancake mix will not make you very good waffles, and the outsides will stay soggy because there isn’t enough sugar and oil to turn crispy.

The crispiness is crucial to getting your waffles fluffy, so do make sure you add these things.

The oil also helps to keep the pancake mix from sticking to the waffle iron, so it is an important addition for that reason too.

The extra egg whites and yolk will help to stiffen the mix and ensure that it doesn’t run once it is added to the iron.

Some people do just add oil to the pancake mix and see successful results, but if you want really crispy, fluffy waffles, the sugar should help. Ideally, you want to make the pancake mix resemble waffle mix as closely as possible, and this is the best method.

Why Aren’t My Waffles Fluffy?

There are a few reasons that your waffles may not seem fluffy enough. The most obvious is that you didn’t get the egg whites stiff when you whisked them, but if that isn’t the case, what else could have gone wrong?

If your pancake mix has been around for a while, try adding an extra generous pinch of baking powder to it. This will ensure that there is an active raising agent in the mixture.

Can You Use Waffle Mix for Pancakes?

Yes, you can use this mixture in reverse, even though the extra ingredients are in there. You may find that your pancakes are sweeter and have a slightly fluffier texture than normal.

Waffles are a bit fattier, so your pancakes will probably also be a touch more crispy than what you are used to. If this is the case, you can add just a little more water, and reduce the amount of oil that you use in the pan.

You can make fluffy waffles using pancake mix by adding whipped egg whites and/or extra baking powder and increasing the ratios of fat and sugar to help the mixture crisp up on the outside. With no alterations, pancake mix will make unsatisfying, limp waffles that are a bit soggy at the edges, so take the time to adjust your recipe and get great waffles from it.

Have you ever wondered how to make waffles in a frying pan as good as regular waffles? Good news: if you’ve got a grill pan, you can do it! A grill pan provides ridges for your waffle, giving it...