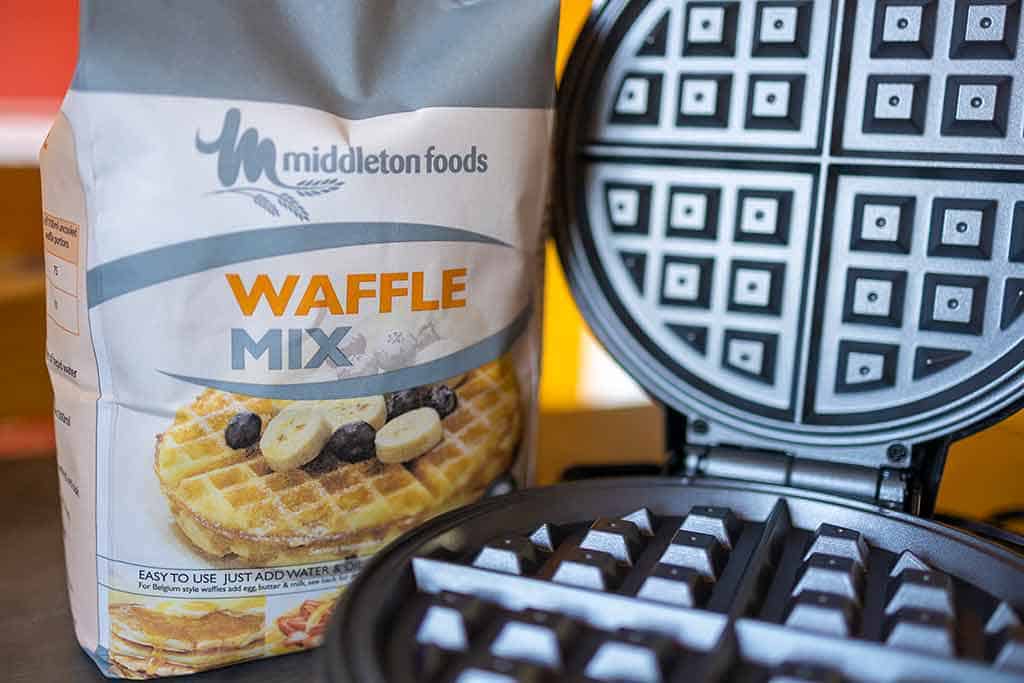 Some commercially available pancake mixes say they can also be used to make waffles, but it depends on whether you want to make good waffles or a breakfast treat that’s almost like waffles because they are quite different.

Pancake and waffle mix are not the same. Although they both contain eggs, flour, milk, and a raising agent, waffle batter is normally thicker, contains more sugar, and more fat, like oil or melted butter. Belgian waffle recipes differ from pancake mix even more by using yeast or stiffly beaten egg white instead of baking soda as the leavening.

Even though pancakes and waffles are interchangeable on the breakfast table they are quite different in taste and texture. So, it’s reasonable to suppose that pancake and waffle mix should be different.

Does pancake mix work for waffles?

People will have you believe that pancake mix and waffle mix are so similar that you’ll be able to make good waffles from pancake mix. While recipes for pancakes and waffles both contain similar ingredients, like eggs, flour, and milk, they are significantly different.

But having said that, will pancake mix work for waffles? The reality is that if you try making waffles with pancake mix you will get something that looks like a waffle and tastes kind of like a waffle. You’ll have the typical waffle shape with dimples or pockets, but the product won’t have the crispy firm exterior of a regular waffle. Instead, it will be a little floppy, just like a typical pancake.

Although the two mixes are different, there is sufficient similarity that you can make a kind of pancake-waffle hybrid when using pancake mix in a waffle iron. However, pancake mix and waffle mix are not directly interchangeable. You can make a delicious waffle-like breakfast treat from pancake mix, but you will need to add some more of some of the ingredients to make it an authentic waffle.

So, what ingredients do we need to add? Well, let’s find out.

What is the difference between pancake mix and waffle mix?

Although packets of commercially available pancake and waffle mix usually include a list of ingredients, unfortunately, the exact amount of each ingredient isn’t usually given. So, the ingredient list is far from being a recipe.

To see what’s the difference between pancake and waffle mix it’s probably best to compare recipes. In the table below I’ve shown the typical ingredients (and quantities) for pancakes, regular waffles, and Belgian waffles.

﻿The sugar helps with caramelization, giving waffles their lovely golden-brown color. Whereas the extra fat (whether oil, butter, or coconut oil) gives a crispier exterior to the waffle and acts as a release agent.

Is Belgian waffle mix the same as pancake mix?

The fat helps to “fry” the waffle between the two hot plates of the waffle maker, giving a crisp exterior to the waffle. The extra sugar produces surface caramelization adding to the golden-brown color and flavor.

So, is Belgian waffle mix the same as pancake mix?

Belgian waffle mix and pancake mix are not the same! Waffles have a higher sugar content, more fat (like butter, canola oil, or coconut oil), and yeast or egg whites for leavening instead of baking soda. If using pancake mix to make waffles, these ingredients need to be added, otherwise, the waffles will be floppy instead of firm and crisp waffles.

If you are trying to make Liege Belgian waffles, you would also need to add pear sugar. Pearl sugar consists of small chunks of highly compressed sugar. These little chunks of pearl sugar do not melt as readily as regular sugar, so remain in the finished waffles as wonderful crunchy bites of sweetness. You will not find Pearl sugar on the list of ingredients on any pack of pancake mix.

How to turn pancake mix into waffle mix

It’s not that difficult to turn pancake mix into a waffle mix. Essentially you just need to add the ingredients in a waffle mix that are short in the pancake mix.

So, what do we need to add?

As we saw above, waffle batter is richer than pancake batter, requiring one or more extra eggs, more fat, and a little less milk (since the eggs and fat will both add liquid).

Both egg and oil (or melted butter) contain fat, in the case of the egg the fat is in the yolk. Depending on the recipe, the egg yolk and white may need separating, this is especially the case when making Belgian waffles.

The egg white is used to leaven the waffle batter by beating until stiff and then folding into the batter. This helps give the waffles a light fluffy texture. You may therefore wish to beat and fold the egg white into your pancake mix, along with the extra egg yolk and oil.

Since waffle batter also tends to be thicker than pancake batter you may wish to cut back the amount of milk or water you add to the pancake mix. You don’t want the mix ending up runny and potentially making a mess of your waffle maker.

Can you use regular pancake mix in a Belgian waffle maker?

However, if you use pancake mix just as it comes and not add the necessary extra ingredients, you’ll be disappointed by the result. Remember, pancake and waffle batter are not directly interchangeable.

TIP: If you want to make waffles using pancake mix, do not forget the additional ingredients that are needed. The resulting product will be better for it!

Why do pancakes and waffles look different?

Pancakes and waffles look different because they are cooked differently.

Pancake batter is thinner than waffle batter and is cooked on a flat griddle or skillet, giving pancakes their signature round form. Waffles, however, are constrained between shaped metal plates during the cooking process. Waffles take on the characteristic round or square shape of the waffle iron plates, as well as the dimpled surface. These pockets on a waffle provide plenty of volume to catch and retain melted butter, syrups, and sauces.

Pancakes and waffles also look different because of the relative quantity of fat, sugar, and liquid. Waffle batters are thicker, and the higher amount of fat and sugar causes the waffle’s exterior to “fry”, giving it a crispy and firm surface that helps the waffle to keep its shape. Since the waffle is completely enclosed by the metal grid plates the waffle’s entire surface will undergo caramelization and become crispy.

Meanwhile, Pancakes, with their lower fat content, do not crisp up as much as waffles and remain floppy when held by one edge.

Because waffles are effectively fried across their entire surface have a continuous and solid exterior. Although pancakes may have a flat and continuous bottom, their tops may have characteristic holes, formed by the release of carbon dioxide from the baking soda. However, these holes can become reduced when the pancake is flipped over to cook the top.